15 – 18 November 2019  The Liner Hotel, Liverpool. Coincided with the FEPOW Descendants Event at the Secret Art of Survival exhibition in Liverpool.

23rd – 26th June 2017 at the Hotel Chatsworth in Worthing as part of Armed Forces weekend.

We were given an amazing welcome by the staff, and guests who had already arrived under their own steam as our coach pulled up at the hotel. It did not seem as if 2 years had passed since our last visit. Our service at the White Church with Revd David Phillips presiding and preaching was simply wonderful. This year we joined in with his congregation at their normal Sunday worship and were invited for coffee afterwards. Ladies in our party have become very ‘taken’ with David but it was Dr Sue who was the envy of all! Pictured (below) with David at her feet! We were delighted to have Patrick Toosey one of our Patrons with us for the whole weekend and Meg and Mike Parkes dropped by to catch up with our news. We welcomed new Associate member Wendy Pope and Jean and Gordon. 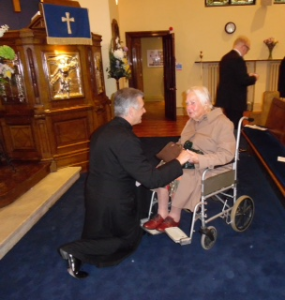 Once again April in this part of the country did us proud with the weather. The sun shone down on us as we made our way out up to the Lakes for our excursion and a boat ride up to Bowness where lunch, ice-creams and a beer or two were enjoyed, as well as some shopping! Our return boat trip was to be a great feat of team work as Lynda Burrows, Jean George, Lyn Tibbles and myself got to work on distributing scones (which I had made at home and brought along), with jam and cream amongst the group. Gerry Norden and my husband Jerry quickly took orders for tea and coffee as Tony Burrows and our bus driver Andrew checked that everyone was back on board.

The weekends always go by far too quickly, but not without our gala dinner on the last night and the finale of the evening led by Alan Mercer as we stroll around the ballroom waving our flags, and singing all the favourite songs in the tradition of former FEPOW Reunions organised by NFFCA. If you want to be part of these amazing weekends of friendship, family and fun, details of our next Reunions are to be found above – Friday 15 – Monday 18th April 2016  at the Cumberland Hotel, Eastbourne and Friday 4th – Monday 7th November 2016 at the Merrion Hotel, Llandudno.

FEPOWs at the Remembrance Service

FEPOWs at the Remembrance Service on the seafront

We held a well attended reunion weekend at the Bedford Hotel in Lytham St Annes from 26th – 29th April 2013. At Friday’s dinner Meg Parkes of the Researching FEPOW History Group gave an update on the FEPOW Repatriation Memorial to be unveiled at Southampton on 27th October 2013. A Service of Thanksgiving and Remembrance was held on Saturday at the nearby White Church at Fairhaven, conducted by Reverend David Phillips and Mrs. Pauline Simpson, the FEPOW Chaplain and NFFWRA Secretary.  The White Church is regularly attended by FEPOW NFFWRA member Jim Crossan, who was at the weekend event.

After the Gala Dinner entertainment was provided by a singer/ comedienne. The raffle and auction of generous donations raised funds for NFFWRA.

Many FEPOWs, wives widows, families and associate members enjoyed the day trip to   Whalley village on Sunday to see the ruins of its medieval abbey, and the 48 arches of Whalley viaduct,

The photos below show the FEPOW line up after the service, and FEPOWS and FEPOW widows at the Gala Dinner. 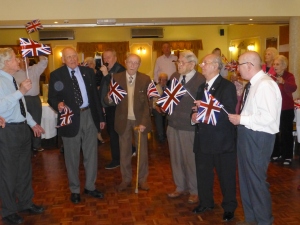 FEPOW memorial on the sea front at Great Yarmouth

The War Memorial on the sea front Llandudno